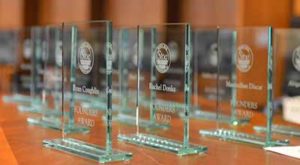 The Stoa Board created an award for presentation at NITOC that recognizes the contribution of Mr. Scott York and his fellow Stoa Founders for their pioneering efforts in bringing Stoa into existence.

The Founders Award will be presented to students at NITOC who receive invitations and compete in their events in all of the following five categories:

Interp in a Box

The Founders Award is not based on how a student performs at NITOC, but honors students competing at NITOC in the full breadth of events offered by Stoa.